This post discusses when a real-valued 1-variable function has global extrema. As usual in rigorous mathematics we start from proper definitions of key concepts.

Such a maximum is called global (or absolute), because the inequality \(f(a)\geq f(x)\) should hold over the whole domain \(D\), not only around the point \(x=a\) as for a local maximum.

Functions without global extrema over an open interval

The simple function \(f(x)=x\) has no global extrema over the whole real line, because the set of all possible values of \(f(x)\) is unbounded. 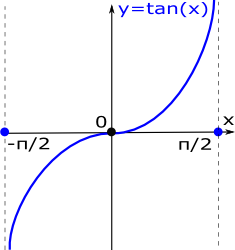 A proof requires a proper understanding of continuity via the epsilon-delta argument. If this theorem is examinable in your calculus course, you could let us know in the comments, which would certainly promote your university.

When does a global extremum exist?

It turns out that a bad domain and discontinuity of a function are the only reasons why global extrema do not exist in the examples above. The powerful theorem below covers the exercise on boundedness of continuous functions over closed intervals, which we stated above.

The Extreme Value Theorem.
Any continuous function over a closed interval has a global maximum and a global minimum.

If you wish to receive e-mails about our new posts (for a quicker chance to answer a riddle and win a prize) or distance courses, please contact us and tick the box “keep me updated”. You can easily unsubscribe at any time by e-mailing “unsubscribe” in the subject line.

BBC News has reported the new term SPOC in Next Big Thing. We shall remind the short story.

For hundreds of years students learned in so-called bricks-and-mortar universities. The general scheme includes
(1) paying large tuition fees for
(2) access to real professors and also
(3) enjoying social life away from parents
(4) hopefully gaining a degree at the end.

However the Internet is changing the education.

Many students have probably heard the term MOOC, see more details in the Wikipedia article. The term MOOC was coined in 2008 and first 3 real MOOCs appeared in September 2011. By September 2013 there were dozens of MOOC providers in different countries. Initially MOOCs didn’t have the same factors as the conventional universities:
(1) large tuition fees
(2) real professors
(3) any social life
(4) certificates.

Several MOOCs have started to offer
(1) discussions and chats with instructors
(2) assessments with identities verified
(3) a small charge for certificates.

The main drawback of MOOCs has been the low retention rate: about 8% of all enrolled students actually pass a final test.

It seems that term SPOC has just been coined by BBC on 24th September 2013. There is no Wikipedia article on SPOCs yet: checked on 27th September 2013. So we shall briefly describe the key points of the BBC report.
(1) Harvard says that we are already in the “post-MOOC” era.
(2) Access to SPOCs will be restricted to dozens or hundreds.
(3) Proper guidance will be provided for the selected students.
(4) Students will be more rigorously assessed than in MOOCs.

We have started our SPOCs (distance courses for maths candidates to top UK universities) in September 2010, which was 1 year before any MOOCs appeared and 3 years before Harvard started to think about SPOCs. We hope that other SPOCs (will) have the same key values as our current courses for top students preparing for MAT papers, Oxbridge interviews, STEP exams:
(1) quick and detailed feedback on regular written homework
(2) training on many problems harder than past exam questions
(3) best tips and advice from our recent successful students
(4) interactive quizzes offering gradual hints when needed.

Actually, we feel rather happy that big players like Harvard are catching up. The flexibility of small start-ups is a great advantage in tech innovations.

Small mammals are now ruling the world, while huge dinosaurs were wiped out. Here is the powerful principle: the size does not matter, but the skills do!

At summer schools we often asked to state Pythagoras’ theorem. The most popular answer was short: \(a^2+b^2=c^2\). Initially we were rather shocked that many students haven’t probably seen any properly stated mathematical theorems.

Now we are more experienced and will give more hints. The first light hint: could you write Pythagoras’ theorem in more details, e.g. by using words? Here is the next popular attempt (literally!): “a squared plus b squared equals c squared”.

Then we ask: what do you mean by \(a^2+b^2=c^2\)? Is it an equation you are going to solve or what? Let us give a parallel example from history.
Question: who is the Queen of England?
Answer: the second!
The numerical answer is correct, but can you expect a full mark? Similarly in mathematics, the equation \(a^2+b^2=c^2\) says very little about Pythagoras’ theorem.

We continue: great, this is the correct first half of Pythagoras’ theorem, could you state the second half? Even good students who have easily written the first half are often stuck and admit that they don’t know the second half. Another hint: is the triangle with sides 3,4,5 right-angled? Everyone says “yes”, so we ask why. The popular answer: by Pythagoras’ theorem.

Then we repeat: do you really claim that our statement above implies that the triangle with sides 3,4,5 is right-angled? Most students are confused, but sometimes we receive this answer: “it’s just the opposite”. Opposite sides of most coins are different and so are opposite statements in mathematics.

It is easier to reverse the longer logical statement: “if \(a,b,c>0\) satisfy \(a^2+b^2=c^2\), then the triangle with the sides a,b,c is right-angled.” Notice how we swapped the two key parts of the statement: if the algebraic condition is given, then the geometric conclusion holds.

Now we ask to write two statements together as full Pythagoras’ theorem. A popular attempt is to write one phrase after another: “Any right-angled triangle with sides a,b,c satisfies \(a^2+b^2=c^2\). If \(a,b,c>0\) satisfy \(a^2+b^2=c^2\), then the triangle with the sides a,b,c is right-angled.” We clarify: can you write a shorter single phrase by making a logical connection between the algebraic and geometric parts?

After talking about “if… then“, “only if” or “only when“, we arrive at the following statement of full Pythagoras’ theorem: “Numbers \(a,b,c>0\) satisfy \(a^2+b^2=c^2\) if and only if the triangle with the sides a,b,c is right-angled.” The most important part is the keywords “if and only if” saying that the theorem works in both directions.

So any mathematical statement consists of 3 key parts:

Many statements are one-sided: if A then B (if a condition A is given, then a conclusion B holds). These statements play the role of a one-side bridge between villages A and B. Namely, villagers can go from A to B, but not from B to A.

Similar and more general statements led to the development of analytic geometry where we rephrase a geometric problem in algebraic terms, solve by using algebraic methods and then translate our solution back to geometry.

You have hopefully appreciated the fascinating fact that triples of positive numbers satisfying \(a^2+b^2=c^2\) are equivalent to geometric shapes of right-angled triangles. Simple Pythagoras’ theorem stated above can be generalised to many (even infinite) dimensions, also works for functions instead of segments and makes sense in very general so-called Hilbert spaces.

In all these cases Pythagoras’ theorem illustrates the powerful principle: 2-sided bridges are much better than 1-sided ones.

It would be much nicer to have a simple problem instead of a hard one. So a natural way to solve a hard mathematical problem is to make it simpler.

The key principle is to simplify.

At summer schools we often ask the simple question: how will you solve the equation \((x-2)^2=1\)? Most students expand the brackets and then apply the quadratic formula.

The standard quadratic formula is a correct general recipe. However, a simple computer program will easily beat you. While you are solving one quadratic equation, the chip in your mobile phone can solve a billion of similar equations. So mathematics is not a cookbook of recipes, but a beautiful subject where efficiency, not brute force, is highly valued.

If we replace \((x-2)^2=1\) by a very similar equation \((x^2-2x)^2=1\), then expanding the brackets will produce a longer and more complicated equation of degree 4. Moreover, any computer program based on the standard quadratic formula will fail.

However, both equations \((x-2)^2=1\) and \((x^2-2x)^2=1\) have the same pattern: a square equals a number. Hence the equations can be solved in the same way. For instance, we could replace the expression under the square by a new variable.

A substitution is a common way to simplify.

How to simplify: try to keep a pattern.